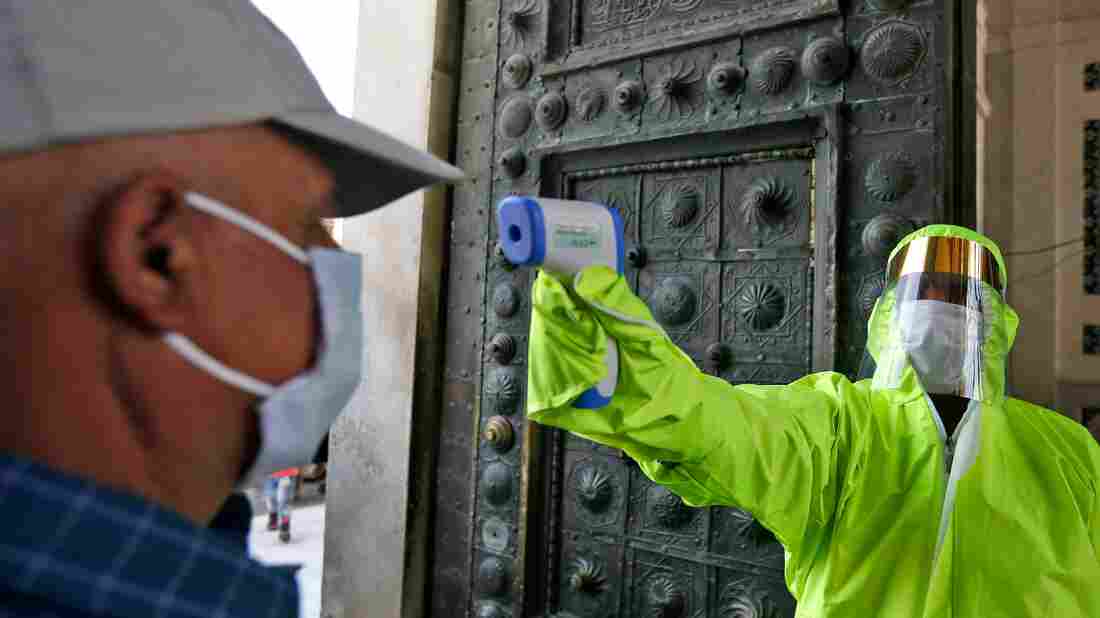 A medic checks the temperature of a Syrian worshipper before entering the Umayyad Mosque in Damascus to attend Friday prayer on May 15. To try to slow the coronavirus outbreak, the Syrian government has banned mass prayers and asked Syrians to stay home over the Muslim holiday of Eid al-Adha this weekend. Louai Beshara/AFP via Getty Images hide caption 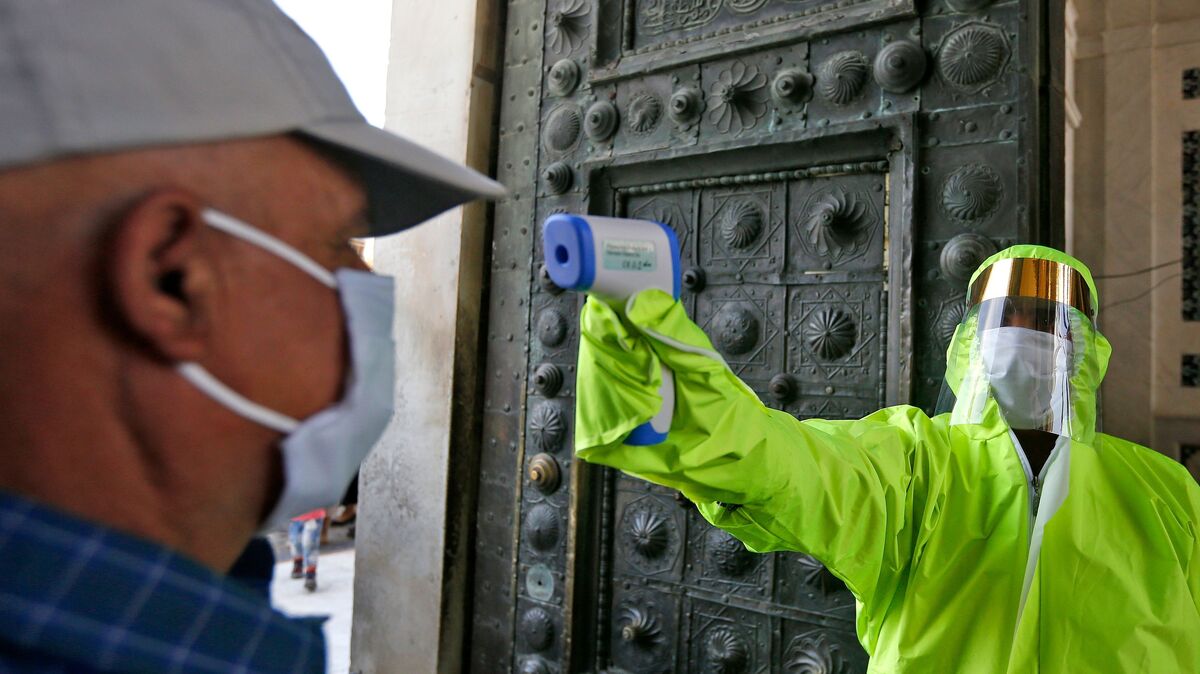 A medic checks the temperature of a Syrian worshipper before entering the Umayyad Mosque in Damascus to attend Friday prayer on May 15. To try to slow the coronavirus outbreak, the Syrian government has banned mass prayers and asked Syrians to stay home over the Muslim holiday of Eid al-Adha this weekend.

The coronavirus is spreading through government-held areas of Syria at an alarming rate and the authoritarian regime uses a campaign of intimidation to suppress information about the outbreak, a medical worker inside the country says.

With hospitals overwhelmed, staff are treating patients in dirty rooms, without enough medication and with little equipment to protect themselves, one medical worker in the country told NPR.

But talking about it can be dangerous.

“There are continuous warnings against doctors speaking on this issue,” said the medical worker, who asked not to be identified for fear of being arrested. He said intelligence officers watch the hospitals and that medical staff feel so intimidated they’re wary even of sharing information about the disease with each other: “We are all scared, all the time.”

READ  Medical News Today: What to do for boiling water burns

Syria’s Health Ministry has reported just 757 cases and 43 deaths across the country. But experts say the reality is much worse. Dr. Akjemal Magtymova, the World Health Organization representative for Syria based in Damascus, told NPR she believes there is a “steep rise” in coronavirus transmission.

In the capital, Damascus, there is evidence of the outbreak. NPR spoke with several Syrian citizens, all of whom said they had relatives who have contracted the virus. A noted Lebanese singer in the country for a performance died of the virus, as did the chief editor of a Syrian news channel.

Medical staff have been particularly hard hit. A report last week by a United Nations humanitarian agency and the WHO said 44 health care workers in Syria had tested positive.

Zaher Sahloul, the president of the U.S.-based charity MedGlobal, told NPR he knows of seven doctors who have died in Syria from the virus in just the last two weeks. “It’s terrible in Syria right now,” he said. “There is an acceleration of cases, doubling every couple of days, a high number of deaths and a high number of hospitalizations. And there is a huge panic and huge chaos.”

Sahloul and Magtymova, the WHO representative, both said the government lacks the testing kits it needs to fully see the scale of the outbreak.

But Sahloul believes the government also “does not want to show they have tens of thousands of infected people” because it would imply the authorities mismanaged the public health crisis. He said that would “anger” a population already beaten down by almost a decade of conflict and an economic crisis.

READ  WHO Sets 6 Conditions For Ending A Coronavirus Lockdown

The Syrian health and information ministries failed to respond to repeated requests for comment.

The medical worker in Syria said that the regime initially called on doctors it considers loyalists to discretely deal with COVID-19 patients. Now there are too many sick to hide.

He said the government is encouraging people to treat themselves at home. Doctors have to buy their own masks.

To try to slow the spread, the government has banned mass prayers and has asked Syrians to stay home over the Muslim holiday of Eid al-Adha this weekend.