A selection of small feeding vessels dating back to the late Bronze Age and early Iron Age. Researchers now say vessels like these were used as a prehistoric baby bottles. Katharina Rebay-Salisbury hide caption

A selection of small feeding vessels dating back to the late Bronze Age and early Iron Age. Researchers now say vessels like these were used as a prehistoric baby bottles.

Breast or bottle? Apparently, parents of infants have been pondering these options for thousands of years.

So suggests a new study released Wednesday in the journal Nature. The researchers report finding non-human milk residue inside a type of ancient spouted clay bowl that sometimes featured animal-shaped feet and heads. The earliest examples of this kind of vessel — which the researchers are calling prehistoric baby bottles — date back more than 7,000 years.

“I can just imagine a little prehistoric child being given one of these with milk in it, and laughing,” says the paper’s lead author, archaeologist Julie Dunne of the University of Bristol. “They’re just fun. They’re like a little toy as well.” She says the animal-shaped vessels seem to represent “mythical animals” rather than realistically depicting any particular type of creature.

The researchers say the milk molecules they identified, via chemical and isotopic analysis, came from the ruminant family, which includes sheep, goats and cows. “This is the first time that we’ve been able to identify the types of foods fed to prehistoric babies,” says Dunne.

The vessels Dunne and her team sampled were found in Bronze and Iron Age infant graves in Bavaria, Germany. She says they are a type of pottery that first appeared in the Neolithic period, at a time when Europeans were making the shift from hunter-gatherer societies to agrarian communities. “It’s only when humans begin to domesticate animals that these foods become available to feed or wean infants,” Dunne says.

The discovery may help explain what was behind a major prehistoric baby boom in that era, according to Siân Halcrow, a bioarchaeologist at the University of Otago in New Zealand.

Until now, scientists hadn’t “recognized that the introduction of animal milk to infants’ diets could have changed a woman’s fertility,” says Halcrow, who was not involved in the study. She wrote a commentary that appears in Nature alongside the new study to provide context.

“There’s clinical evidence that when women are breastfeeding, they have a period of infertility,” says Halcrow. “So if women aren’t constantly suckling their young” — for example, because they’re using animal milk to wean their children earlier — “they could actually have more babies during their lifetime, and it could result in an increase in population size.”

“This could lead to some of the population changes that we see around the Neolithic [era], with the major demographic explosion,” she says.

But this expanding population may have come at the expense of individual health. “Human breast milk is perfect for babies,” Halcrow says. “In terms of macro-nutrients, micro-nutrients, immune cells. And cow’s milk is obviously not as suitable a complete infant food.” She says it’s possible that the prehistoric humans were adding animal milk to babies’ diets slowly, but if babies were transitioned completely off of human milk too early in their lives, “it could have been extremely detrimental” to their immune function and nutrition.

“And these bottles would have been so hard to clean,” Halcrow adds. “Never mind them not having access to clean water in the first place. But getting into those tiny little spouts? These would have been really unsanitary to use, and introduced all kinds of germs into the infant diet.” 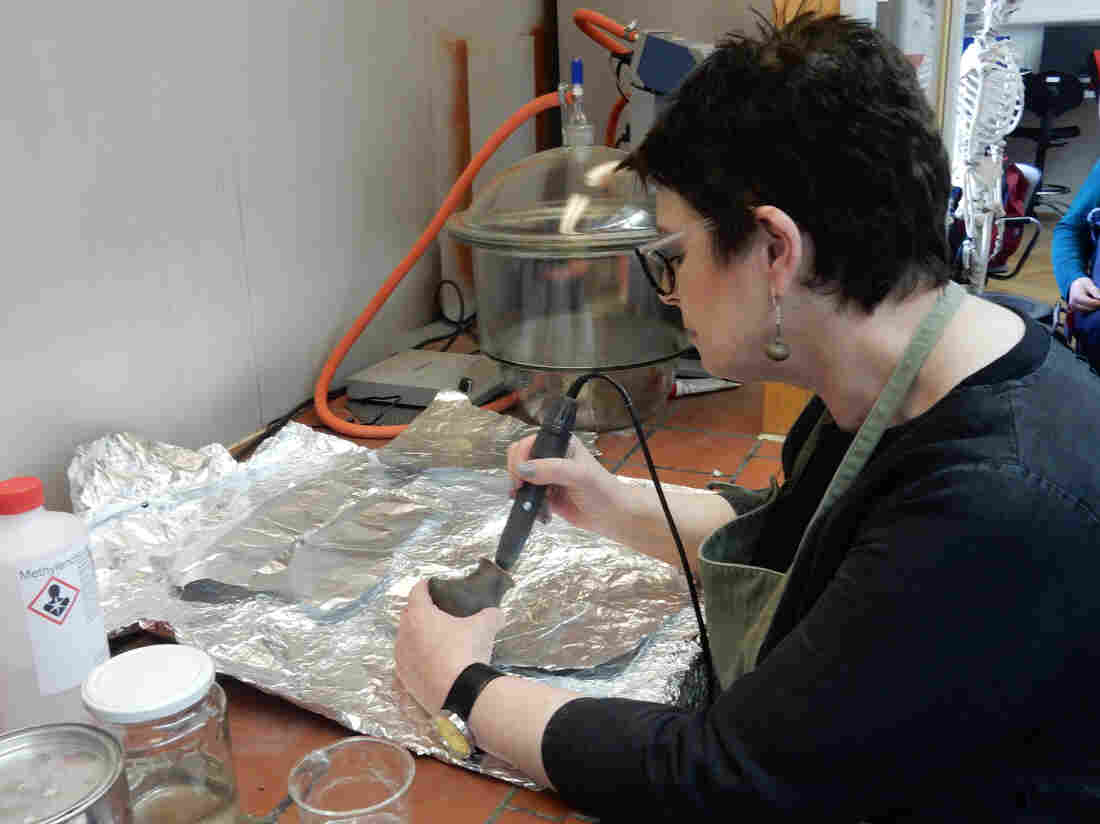 Archaeologist Julie Dunne of the University of Bristol examines one of the prehistoric feeding vessels which she she says were used as ancient baby bottles. Katharina Rebay-Salisbury hide caption

READ  Help Oliver’s Harvest Give Back to Animal Shelters 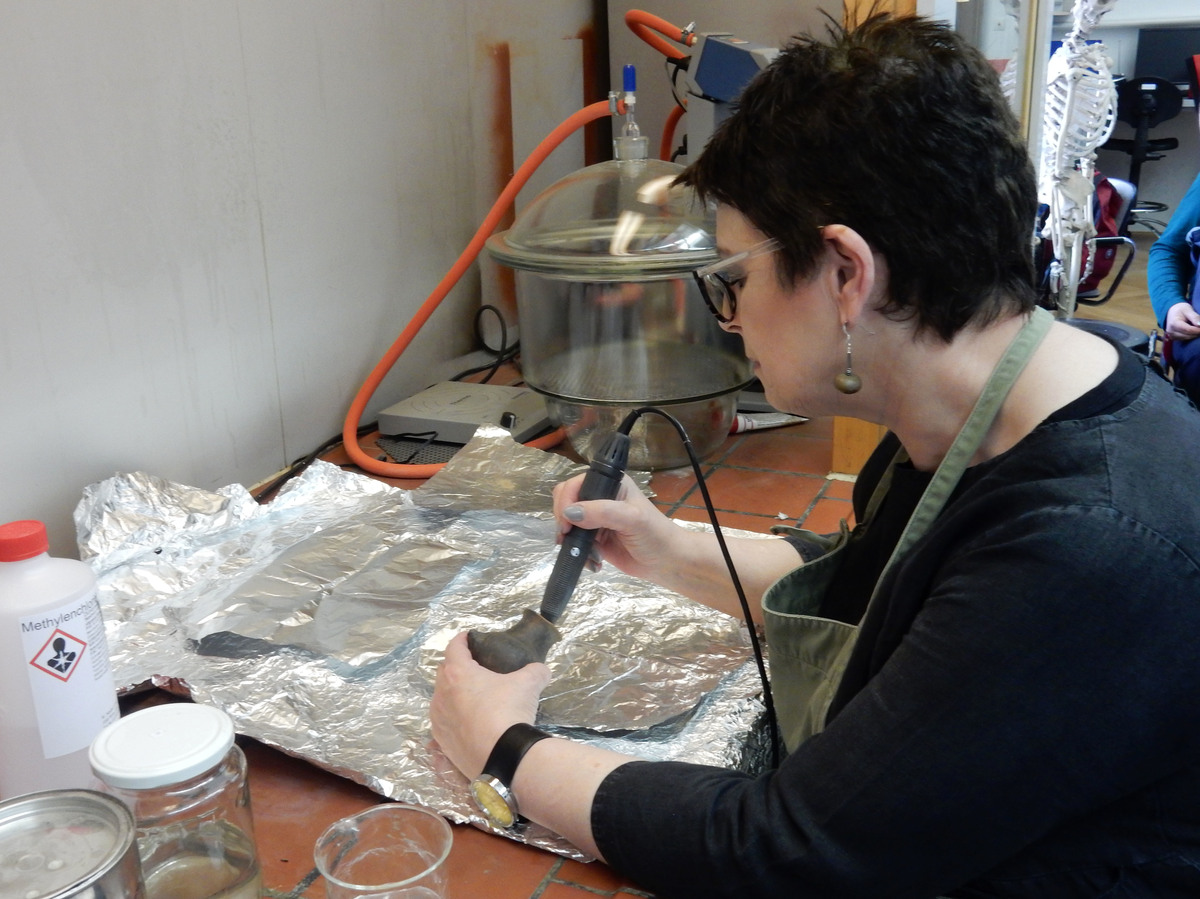 Archaeologist Julie Dunne of the University of Bristol examines one of the prehistoric feeding vessels which she she says were used as ancient baby bottles.

One of the vessels showed traces of multiple types of fats, one of which, the scientists say, could have been remnants of human breast milk. “There’s no reason to suppose that women might not have expressed milk into one of these pots for use later, as we do today,” Dunne says.

Previously, scientists had conjectured that pottery of this type — small, hollow vessels with long, narrow spouts — was used to feed the sick or elderly. As for why scientists are just now discovering that the vessels were used for infants, Dunne says, “Let’s face it. Sometimes research on women tends to be a little bit marginalized compared to research on what the men in prehistoric times were doing out there — you know, fighting, or hunting and gathering, and all that kind of stuff. So you don’t get perhaps so much about women and motherhood and children.”

Halcrow agrees. “It wasn’t really until the 1970s and 1980s that archaeologists started to become interested in where women were in the past, and from that they started to look, by extension, at infants and children. So it’s only really been the last 15 to 20 years that there’s sort of been an explosion of the study of children.”

“Broadening our lens to include infants and children in the past is really important for a number of reasons,” Halcrow says. “They made up a high proportion of past populations. And if their health and experience is poor, that’s obviously detrimental to society’s function.”

“We originally went forward to find vessels in child graves, because that would absolutely confirm for us that they were children’s feeding bottles,” says Dunne. And her team got extra validation — albeit of a more anecdotal variety — from the child of a friend.

“When we gave a reconstructed one to [baby] Noah, it’s very intuitive, so it fit just perfectly within a baby’s cupped hands. And he loved it,” Dunne says. “He started immediately sort of suckling from it. He was really happy, sitting there playing with it and suckling from it for ages.”