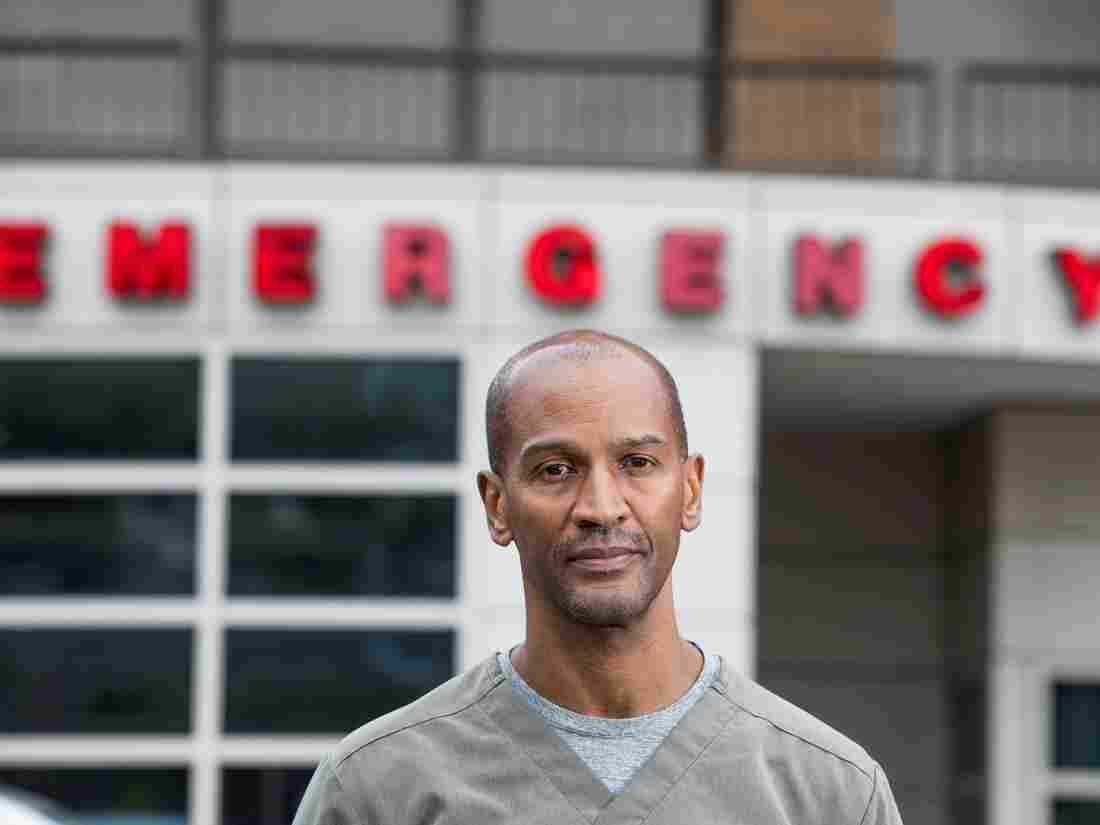 Dr. William Strudwick stands outside Howard University Hospital, where he works as an attending physician in the emergency department. Tyrone Turner/WAMU hide caption 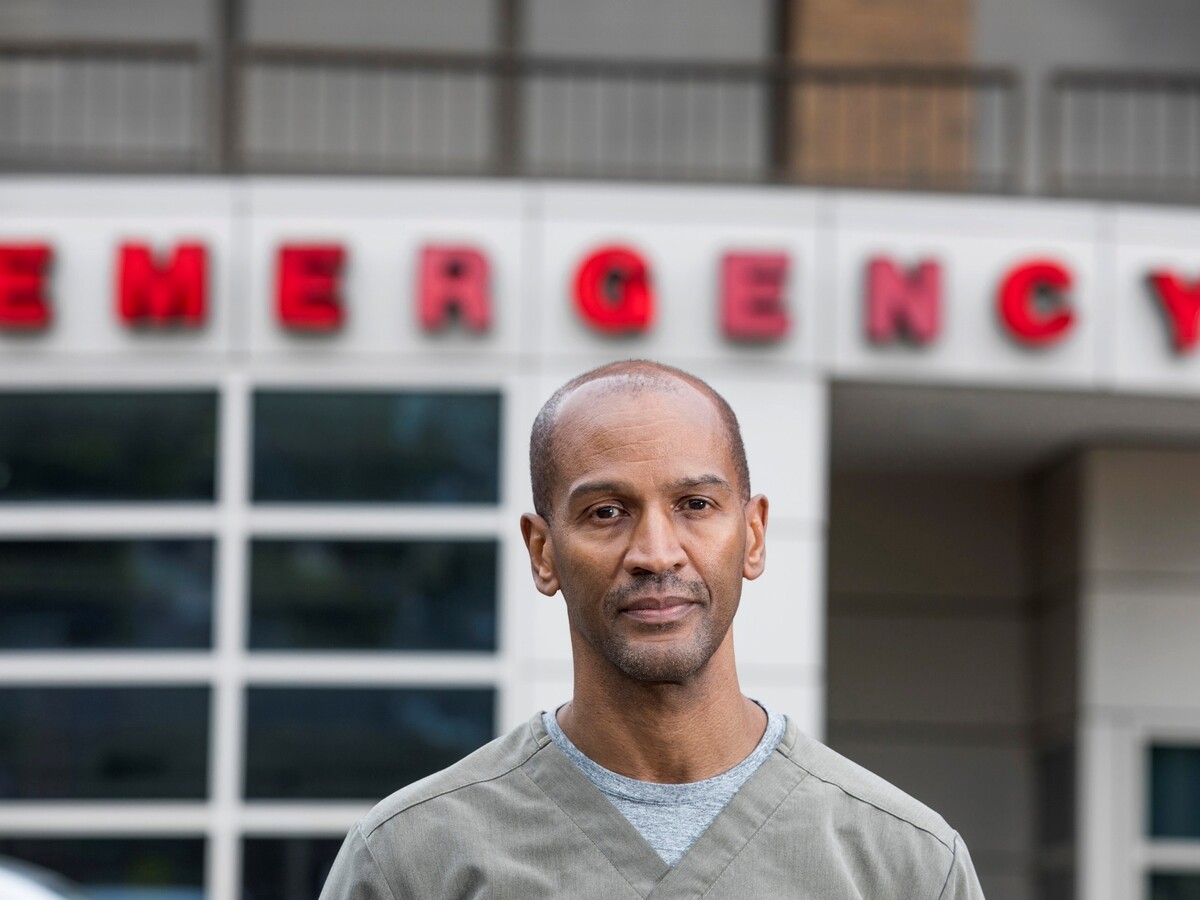 Dr. William Strudwick stands outside Howard University Hospital, where he works as an attending physician in the emergency department.

Dr. William Strudwick was finishing a shift at Washington, D.C.’s Howard University Hospital when his wife, Maria, texted. Their 19-year old son, Cole, wanted to join a protest five days after the killing of George Floyd.

It was 9 p.m. After dark, Strudwick weighed, he couldn’t predict how protesters would act — or how police would treat his son. He wrote back one word to his wife: “No.”

“When I came home, he was not there, and so I called him,” Strudwick said. “And we had the conversation about him returning immediately.”

About one in six doctors in D.C. is African American, like Dr. Strudwick, according to the city’s Department of Health. That’s three times the national average, although still a small portion compared to the population that’s 46% Black.

These doctors see in their wards some of the African American patients who make up the vast majority of the city’s COVID-19 fatalities. For Dr. Strudwick, Dr. Janice Blanchard at George Washington University Hospital and Dr. Marcee Wilder at United Medical Center, working amid the pandemic, inspires a sense of duty – and sometimes despair.

Wilder, 38, grew up in New York and said she saw little difference between her childhood in Harlem and the mostly African American neighborhood where she works.

“I see myself in this community,” Wilder said. “And so watching them suffer has been pretty hard.”

Blanchard, 51, said she works to counter implicit bias that can lead to poorer health for Black patients.

“I think as a Black doctor, it’s my responsibility to do everything in my power to make sure that a Black patient is getting fair treatment,” Blanchard said. For many COVID patients, that was not enough. “You feel helpless, almost, that you’re not able to help them.”

Strudwick, 57, was born in what was the Freedmen’s Hospital, founded in 1862, to treat formerly enslaved people. Today it’s part of the historically Black Howard University, where both of Strudwick’s parents studied to become physicians. Growing up in Washington, D.C., it seemed natural to follow in their footsteps.

That Black middle class has been relatively insulated from the pandemic, Strudwick observed. So he was baffled when a friend suddenly passed away. They were the same age and they raised their kids together, two African American men appearing to lead parallel lives. But the friend died alone at home. His family blamed COVID19. Dr. Strudwick wondered if his friend quietly struggled to afford healthcare.

“He should have had access. He could have called me,” he said. 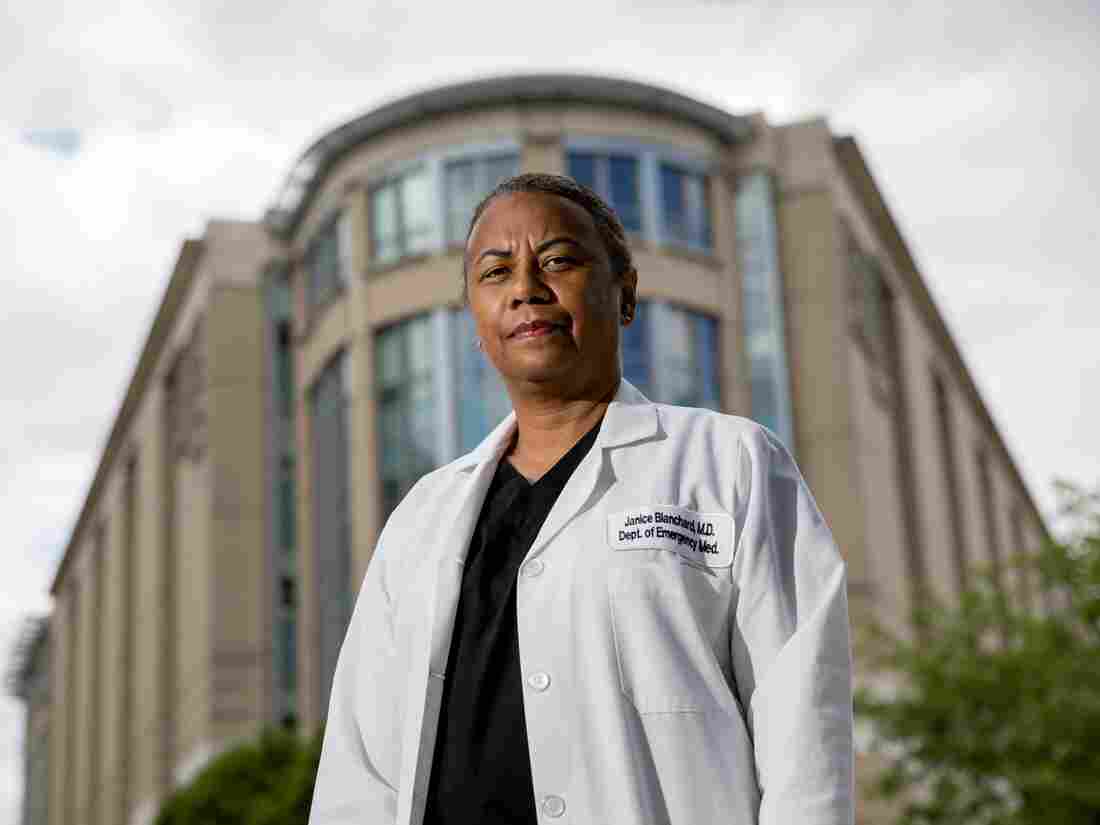 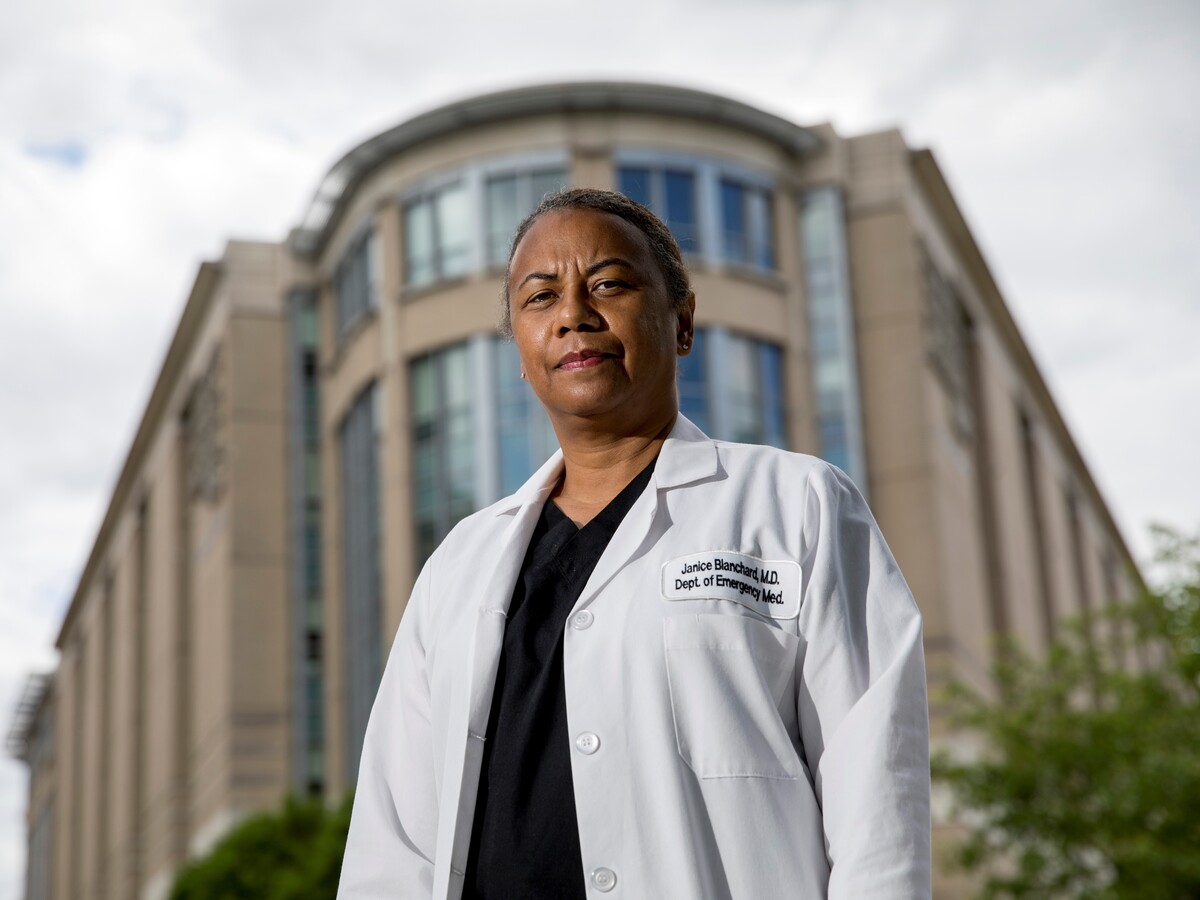 The frustration is familiar to Dr. Janice Blanchard, who noticed the public health guidelines for COVID-19 did not fit the lives of some of her patients at George Washington University Hospital. She remembers calling an African American patient to give a positive COVID-19 test result and hearing a crowded household on the line.

READ  H1N1 Was The Last Pandemic. Here's Why COVID-19 Isn't Yet In That Category

“And then, you’re like, okay, I sound pretty silly,” she said. “I’m telling them to socially isolate … with seven people?”

Growing up in Chicago, Blanchard said her family had modest means, too: her mother was a teacher and her father, a bus driver. While treating the pandemic, Blanchard and Wilder cowrote a paper with other Black doctors in D.C. for Academic Emergency Medicine. They said COVID-19 was more fatal for their patients of color who had chronic disease; those patients developed those diseases because they lacked good food, space to exercise, housing and regular income.

“As Black and brown people, we’re already starting off behind, right? And now you have something like COVID that’s just devastating communities,” Blanchard said.

D.C.’s highest COVID-19 death toll is in Ward 8, a mostly African American area where Wilder works at the city’s only public hospital. One man in his 70s arrived gasping for air, suffering from COVID-19. Wilder met with his daughter and explained his chances were not good. 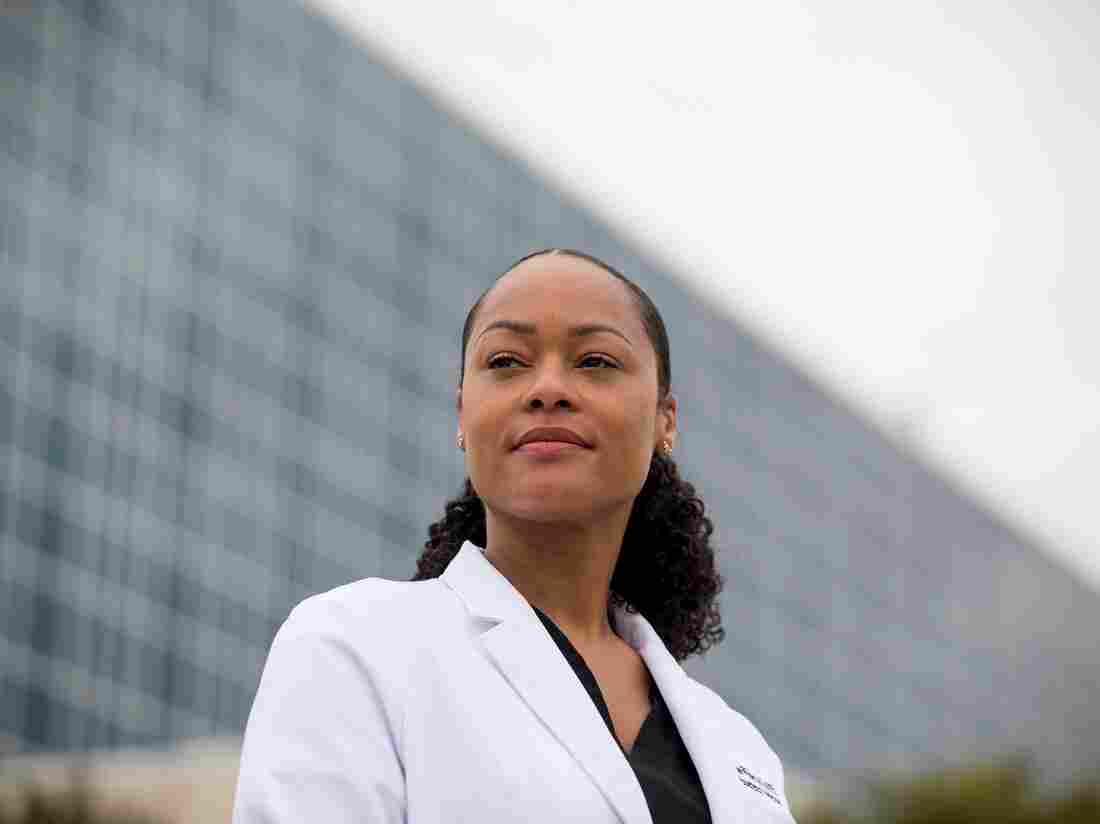 Dr. Marcee Wilder stands outside United Medical Center, the public hospital serving Wards 7 and 8. She says her patients were more vulnerable to COVID-19 because they had less access to good food, steady income and reliable healthcare. Tyrone Turner/WAMU hide caption 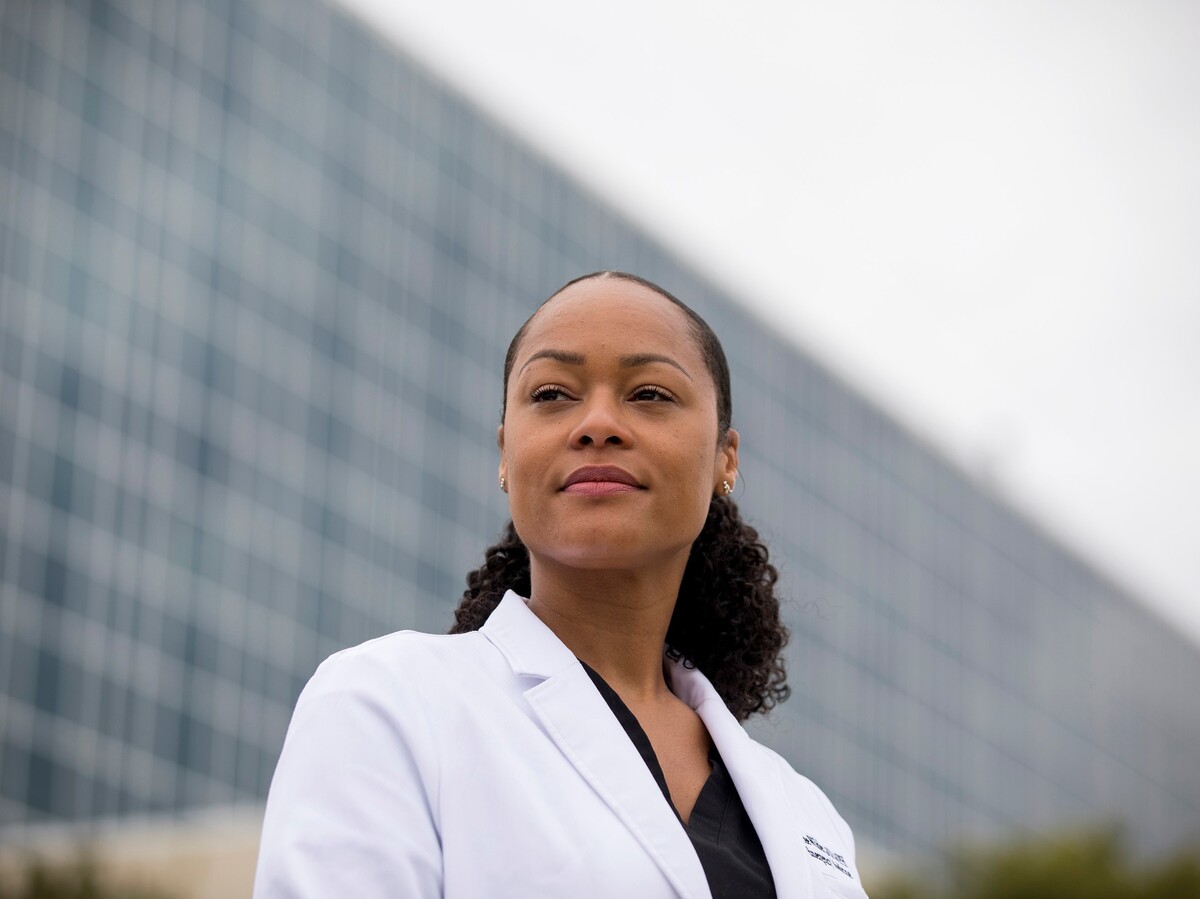 Dr. Marcee Wilder stands outside United Medical Center, the public hospital serving Wards 7 and 8. She says her patients were more vulnerable to COVID-19 because they had less access to good food, steady income and reliable healthcare.

“As I was leaving the room, I remember her asking ‘if he’s not going to make it, can I come see him?’ And I had to tell her no,” Wilder said.

The man died less than a week a later.

Wilder said the man had high blood pressure, which worsened his chances. She said his death reflected the disadvantage of the neighborhood.

“Nothing would have helped even if UMC was a brand new, $20 billion dollar hospital, that would not have changed the outcome that we’re seeing in COVID,” she said. “This is not a medicine-related problem. This is a social determinants of health, poverty related, marginalized community problem.”

Lately, the three doctors say COVID 19 cases have slowed. But Wilder says being African American weighs on her as she thinks about George Floyd’s death and about who is worst affected by the coronavirus.

“We need allies. We need people in powerful places to see our humanity and decide that the time is now for action,” she said.

That is why she marched with her husband and their two young daughters for racial justice in early June. Without coordinating, Blanchard attended that same rally, packing hand sanitizer and holding a Black Lives Matter sign above her head near the White House. And Strudwick and his wife walked three and a half miles from home to reach the protest.